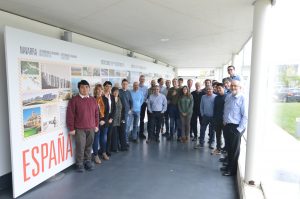 The European Union has set a target of a share of 14 % renewable energy in the transport sector by 2030 in the Renewable Energy Directive (RED II) in 2018, in order to tackle the greenhouse gas reductions required to prevent a surge in global average temperatures. This requires a large-scale deployment of biofuels focusing on those that do not compete with food and feed, in addition to electrification and the increased deployment of rail transport.

For that reason, specialists in the field met together last 4-6th in CENER (National Renewable Energy Centre of Spain) headquarters, for discussing around the synthesis of advanced biofuels through thermochemical conversion of biomass-based residues. This promising route to achieve the above mentioned objectives by the use of gasification technology is being developed in the framework of CLARA project (Horizon 2020). Within the project, an efficient technology for the production of liquid fuels based on chemical looping gasification (CLG) of biogenic residues is being developed in industrial environment. Furthermore, the project aims at devising and optimizing innovative, cost-efficient technologies for biomass pre-treatment, and syngas cleaning.

Although the project is on its first steps, the main outcomes highlighted have been especially focused on biogenic residues, requiring a preceding biomass pre-treatment and the novelty of the suggested chemical looping gasification and syngas treatment concept. Further details in the section 4 of the Public Report I.

Interesting results have been also obtained to date during this project in relation to the pretreatment of biomass proposed for chemical looping gasification.  Although this technology can be considered suitable for feedstocks with high contents of impurities, it is still necessary to adopt a proper pre-treatment of the feedstock in order to optimize the process performance, and at the same time allow for an easier handling, storage, and transportation of the biomass.

The pretreatment of the biomass is being carried out in the Biorefinery and Bioenergy Centre (BIO2C) of CENER, the National Renewable Energy Centre of Spain. This is a semi-industrial pilot scale test facility able to develop production processes for bioproducts, solid biofuels, advanced liquid or gaseous biofuels, as well as biorefinery concepts integrating different valorization routes, as an intermediate step between laboratory and the industrial scale-up of these technologies.

The biogenic residues tested so far by CENER in the framework of CLARA project have been pine forest residues and wheat straw. At the moment, tailored made pre-treatment concepts for wheat straw feedstock are being developed. These concepts are a combination of up to four processes: physical pretreatment, torrefaction, washing, and pelleting/additivation. Once the process is optimized, modeled and validated at laboratory scale, in 2020 CENER will upscale the trials in its demo scale unit, with a production capacity up to 350kg/h.

Since the project is on its early phase, CENER considers these results as very positive, and still envisages room for improvement in further work.

This website uses Google Analytics to collect anonymous information such as the number of visitors to the site, and the most popular pages.