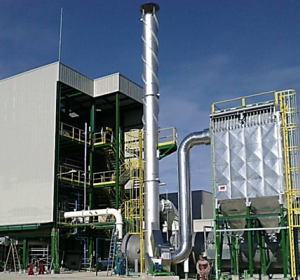 CENER, the National Renewable Energy Centre of Spain, has been working for years on gasification, one of the most promising technologies today, especially due to its potential in the production of biomethane or biohydrogen.

The Biorefinery and Bioenergy Center (BIO2C) is a semi-industrial pilot scale testing facility where CENER develops processes and technologies as an intermediate stage between the laboratory and industrial scale.

The energy crisis in which we are currently immersed in Europe is causing the energy costs of both electricity and natural gas to skyrocket both for industries and for citizens. That is why it is increasingly urgent to develop decarbonization technologies, essential for the energy transition, and thus reduce our dependence on fossil resources.

On this regard, biomass use is one of the main pillars, already widespread as firewood, chips or pellets, and with high potential as feedstock for the production of renewable gases and advanced biofuels that can be used both for direct injection on the network and for its use in mobility, through technologies such as pyrolysis, hydrothermal liquefaction, gasification and others.

Gasification is a partial oxidation process at high temperature (700-1500 ºC) through which biomass is transformed into synthesis gas, containing mainly CO, CO2, H2, CH4 and C2Hx. Syngas can be catalytically converted into high value-added products such as biofuels and chemicals, or into hydrogen. Through this route, a variety of synthetic liquid and gaseous biofuels can be produced from the gasification of lignocellulosic biomass: synthetic natural gas or biomethanol by methanization, or by Fischer-Tropsch synthesis, biodiesel, biogasoline and biokerosene.

Biomethane composition, for example, is very similar to that of natural gas, so it is possible to inject it into the gas network that we currently have, and it is also compatible with the use of vehicles that use natural gas.

For this purpose, CENER is running it own Gasification Unit in the BIO2C in which tests at demonstrative level are carried out for the industry. This Unit is a unique demonstration plant nationwide, both for its size of 2 MWt of bubbling fluidized bed, as well as for its operation with a wide range of biomassses (such as chips, straw, forest residue, pruning residues…) in temperatures between 650-1000 ºC, and both with air and with mixtures of steam and oxygen as a gasifying agent.

After gasification, the produced syngas must be cleaned and conditioned for catalytic conversion, as it contains tars and other contaminants, such as H2S, COS, HCl, particulate matter, and nitrogen species (NH3 and HCN), which need to be removed before catalytic synthesis processes. For this reason, in the BIO2C Gasification Unit, a synthesis gas purification system will be implemented on a pilot scale that will treat 10% of the syngas generated, according to the specifications of the synthesis processes.

At the moment, this facility is available to carry out projects in collaboration with companies for the development and demonstration of technologies for the generation of hydrogen or synthetic biofuels from synthesis gas. With such kind of initiatives, CENER aims to provide new technological solutions, necessary for a sustainable energy transition, and contributing to the fight against climate change.

Among the latest experiences developed by CENER, it is worth highlighting forest residue and cereal straw gasification, carried out within the framework of the European research project Horizon 2020 BRISK2.

The process to carry out this type of demonstrative tests is based on, first, preparing several tons of feedstock in terms of chopping, chipping, grinding or pelletizing, depending on the type of biomass to be tested in the Pretreatment Unit, located also in the BIO2C. In addition, feedstocks are characterized according to their elemental composition: sulphur, chlorine, moisture content, ash content and composition, density, and calorific value. If necessary, cold tests are also carried out on the feeding of each type of biomass to characterize its behaviour, adjust the control parameters and guarantee the correct feeding control during the gasification tests.

Afterwards gasification tests are carried out, using both air and oxygen/steam mixture as gasification agent. Currently, industrial scale gasification is carried out with air which, as it contains nitrogen, generates a combustible gas with lower calorific value, but suitable for thermal applications in industry (for example, in industrial furnaces).

That is why CENER also works on pre-industrial scale in gasification, with mixtures of steam and oxygen, thus obtaining a synthesis gas not diluted with nitrogen and suitable for the production of hydrogen or the synthesis of biomethane. During these gasification tests, the operating parameters such as the following are recorded: reactor temperature, biomass flow, synthesis gas flow, etc…In addition, analysis of synthesis gas composition produced for each experimental point is carried out, as well as particles and tar content measurement.

This way, this biomethane or biohydrogen from gasification can be injected into the grid and used in all kind of domestic and industrial applications, or be transported to a gas station/hydrogen station to be used in vehicles (liquefied and compressed), thus substituting natural gas. Hence, this is a key pillar in the decarbonization of industries and energy security, which also through the valorisation of biowaste is a clear example of circular economy.