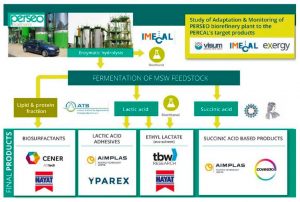 Last December, specialists in the field of biowaste conversion into valuable bio-based products gathered together in the Biorefinery and Bioenergy Centre (BIO2C) of CENER in the framework of PERCAL project. The main aim of this appointment was to discuss around the exploitation of the organic fraction of municipal solid waste (OFMSW) as feedstock to develop intermediate chemical products at high yield and low impurity level with industrial interest.

In the EU over 100 million tonnes of municipal biowaste are thrown away each year. Currently 75% of this biowaste is landfilled or incinerated, causing major environmental problems, since biowaste produces greenhouse gases when it decomposes and contaminates soil and groundwater. Furthermore, landfilling of biowaste is against the principle of a circular economy and is a waste of nutrients, energy and potential resource for biobased products.

For that reason, specialists in the field met together last December 9th and 10th in CENER – National Renewable Energy Centre of Spain, for discussing around innovative solutions to transform OFMSW into high value-added products, using a cascade approach of valorization of this biowaste. Indeed, complementary routes to the bioethanol (current PERSEO technology) production are being developed. The three main pathways are focused on the one side on lactic acid to produce eco-friendly ethyl lactate solvents by reactive distillation from lactic acid & bio-ethanol to be used in cleaning products and inks, and hot-melt adhesives for cardboard and other non-food applications in combination with maleic anhydride by reactive extrusion. On the other side, on succinic acid as an intermediate building blocks to production of polyols for the polyurethane industry. And finally, on the production of biosurfactants by chemical and/or microbiological modification of protein and lipid fraction from remaining fraction of MSW fermentation, for its use in cleaning products. These promising routes to achieve the above mentioned objectives by the use of one or a combination of different technologies, are being developed in the framework of PERCAL H2020 project, coordinated by IMECAL.

The project is already on its last step, and the main outcomes highlighted during this last year have been related to:

In further detail, CENER is leading a workpackage and its research line is focused on biosurfactants production by valorising the bioethanol, lactic acid or succinic acid fermentation by-products in order to increase the recovery from the organic content of MSW. The hydrolysis, extraction as well as biosurfactant production is being carried out in CENER Biochemical Process Unit laboratory.

The OFMSW-derived ethanol fermentation by product tested by CENER in the framework of PERCAL project is being supplied by IMECAL. Once received, the material is characterized and subjected either to an enzymatic hydrolysis process or to lipid extraction. Interesting results have been obtained so far in relation to the amount of total available proteins and lipids from the fermentation by-product, accounting to more than 25% by weight. Consequently, these two recovered fractions can be further valorized through the production of biosurfactants by chemical or enzymatic pathways. In further detail also highlight that the produced biosurfactant has been successfully tested in detergent formulations, showing a similar performance compared to a commercial surfactant. Biosurfactant is a very interesting final product due to the growing market demand of this type of compounds, even more when considering the biological-renewable composition, accounting to approximately 95%, which is aligned with the increasing consumers environmental concerns. Besides, the techno-economic assessment is underway and will help to improve its optimization and further upscaling.

Since the project is on its latest phase, CENER is still working hard in the improvement of the biosurfactant production and its testing in detergent formulations during these last months of the project that have shown very positive results so far.